In a previous post, we had taken a shortcut: we had TeamCity running inside Kubernetes, sharing its Docker daemon. That trick allowed Kubernetes to access the Docker images produced by our builds. In this post, we’ll setup our own Docker registry and publish Docker images there.

We’ll follow the instructions here about setting up a registry with a self-signed certificate. The certificate will need a hostname, we’ll be using registry.local.

First, we create a folder named certs and generate the certificate there:

The important part is the Common Name field, which needs to match the hostname of the registry.

We’ll now setup TeamCity outside Kubernetes (so it won’t be able to share its Docker anymore) and create the Docker registry. We can use docker compose to put everything together. Here’s the docker-compose.yaml we can use:

The next step is to change the build configuration in TeamCity so that it will publish the Docker image to the new Docker registry. We’ll create a configuration property to avoid repeating the registry.local:5000 all over the place:

We need to tag the image, which is easily done with the native Docker Build runner: 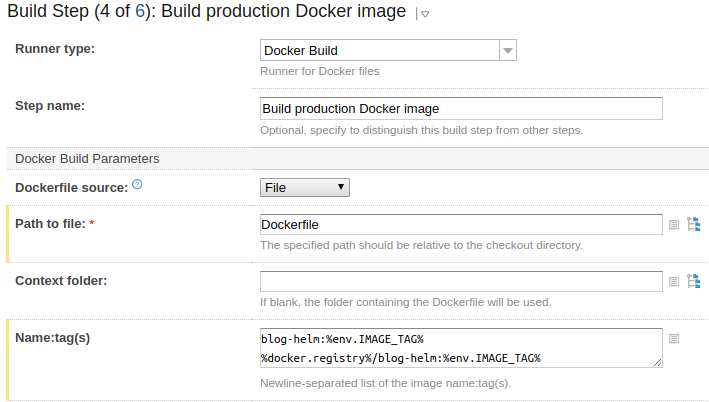 and we need to push the image to our registry, which requires a new custom step:

We also need to change the Helm chart to indicate that the image comes from registry.local:5000/blog-helm and that it should pull the image if it doesn’t exist locally. That’s in values.yaml:

The remaining parts are actually workarounds, compensating for the fact we’re using locally hosted services and self-signed certificates. Let’s start with the hostname registry.local. TeamCity now runs on the host’s docker, so we can edit /etc/hosts and point registry.local to 127.0.0.1 (localhost). From Kubernetes’s point of view however, localhost won’t work, because it will resolve to the internal network of Kubernetes. Here’s a quick way of figuring out what IP to use:

Here’s the additions to the hosts file on the host:

and here’s the hosts file inside minikube:

The final step is to convince minikube’s Docker to trust our self-signed certificate. Essentially we need to copy the certificate inside minikube in the folder /etc/docker/certs.d/host:port/ca.crt. We don’t need to restart Docker after this:

We’re all done, now we can build and deploy using the brand new Docker registry. Here’s a pod using the image of the new registry: 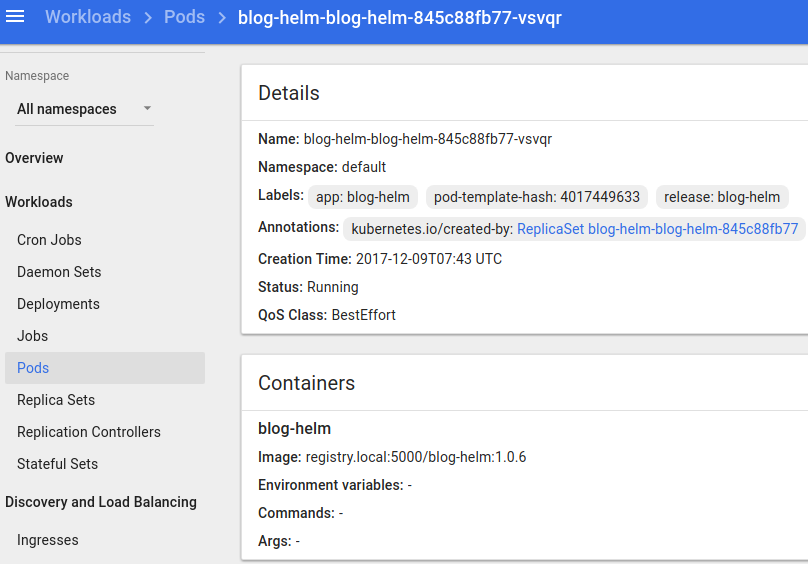 Introducing a Docker registry brings out setup one step closer to a more realistic setup. A Docker registry is the authority point where you push (during build) and pull (during deployment) images. In a next post, we’ll use AWS and implement a secure Docker registry there. But before that, we’ll explore how we can model our DTAP.

Thank you for reading this post. If you liked it, spread the word or see how you can support this blog!
Tags: blog-helm-sample docker helm kubernetes TeamCity
This site uses third party cookies from Google Analytics and Google AdSense Accept and close popup