In this post we’ll create a small Java application, run it inside a Docker container, and use IntelliJ IDEA to debug. This is a rather large post, so take your time.

Introduction to the app

First, an introduction to the application itself. I started this as an experiment for Kafka and Apache Avro. There are two main classes in the application: a producer and a consumer. They can be started individually and the producer is able to send sample “users” to the consumer. A user is an object that has a name, a favorite number and a favorite color. The producer is interactive, so you type at the console the user’s information and the user gets published to Kafka, serialized with Avro. The consumer simply polls forever, printing any user it might receive. We’ll package the consumer into a Docker image.

but we’ll focus on the Docker side and debugging with IntelliJ.

To create a Docker image, we need a Dockerfile. It looks like this:

Lines starting with # are comments. There are 4 instructions in this file:

If we have this Dockerfile at the root of the project, we can build a new image. First we need to prepare the jar with mvn packge and then we build the image like this:

This builds an image called consumer and uses the Dockerfile on the current folder (that’s the . argument). We can run the image:

This will run the consumer image (last argument) into a new container named also consumer (that’s the optional --name consumer argument). If everything goes fine, the user consumer will start, waiting for messages.

In general, things are easier when the application consists of a single file (jar, war, whatever). It is possible to produce a jar in which all the dependencies are packaged together with the maven-assembly-plugin. We’ll need this plugin declaration in the pom:

When we run mvn package, this will kick in automatically and create an additional jar named kafka-playground-1.0-SNAPSHOT-jar-with-dependencies.jar. The size of the plain jar is 12K while this new jar weighs in at 4.5MB, so batteries are included.

To debug our app, we need to run it with a different command. The java command needs one extra parameter:

where 50505 is the port we’ll use for debugging. It can be any port, it’s up to us. Since debugging is done over the network, that also means we need to expose that port in Docker. In any case, we need a different Dockerfile.

According to Docker best practices, it’s best to put each Dockerfile in an empty directory. We still need our old Dockerfile for regular run (e.g. production) and we need a new one for debugging only. This is where we need to add some structure to the project.

We’ll create a folder called docker and inside that two folders: debug and release (that’s my .NET background kicking in). In the release folder, we’ll place our current Dockerfile. In the debug folder, we’ll create this new Dockerfile:

To build the debugging Docker image, we’ll have to run this command:

But, it does not work! That’s because the COPY command fails. Host paths are relative to the Dockerfile, so it’s looking for target/*.jar inside our new docker/debug folder. You can try ../../target/*.jar but that also does not work. By design, Docker does not allow you to include things outside the folder hierarchy defined by the folder where the Dockerfile lives. In other words, we’ll have to bring the jar into that folder.

I implemented that with the mavent-antrun-plugin. It allows you to run Ant targets during Maven execution. In this example, we copy the generated jar from the target folder into the new docker folders:

Notice that I have preserved the target folder inside docker/debug and docker/release, because it is already part of my .gitignore. This is how the folder structure looks like: 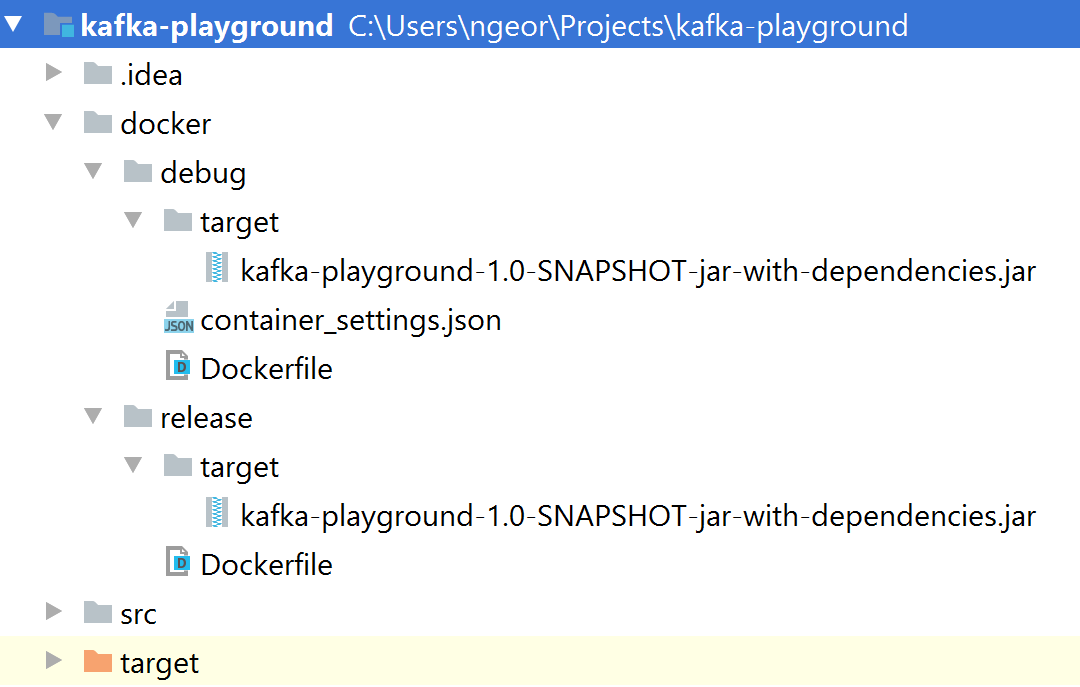 It’s a good idea to also cleanup after ourselves. It would be great to delete the new copies of the jar file when we run mvn clean. For that reason, we’ll need this configuration:

And we’re all set.

The IntelliJ plugin is called Docker Integration and it’s provided by JetBrains. It offers various features:

First of all, it needs to know where our Docker is: 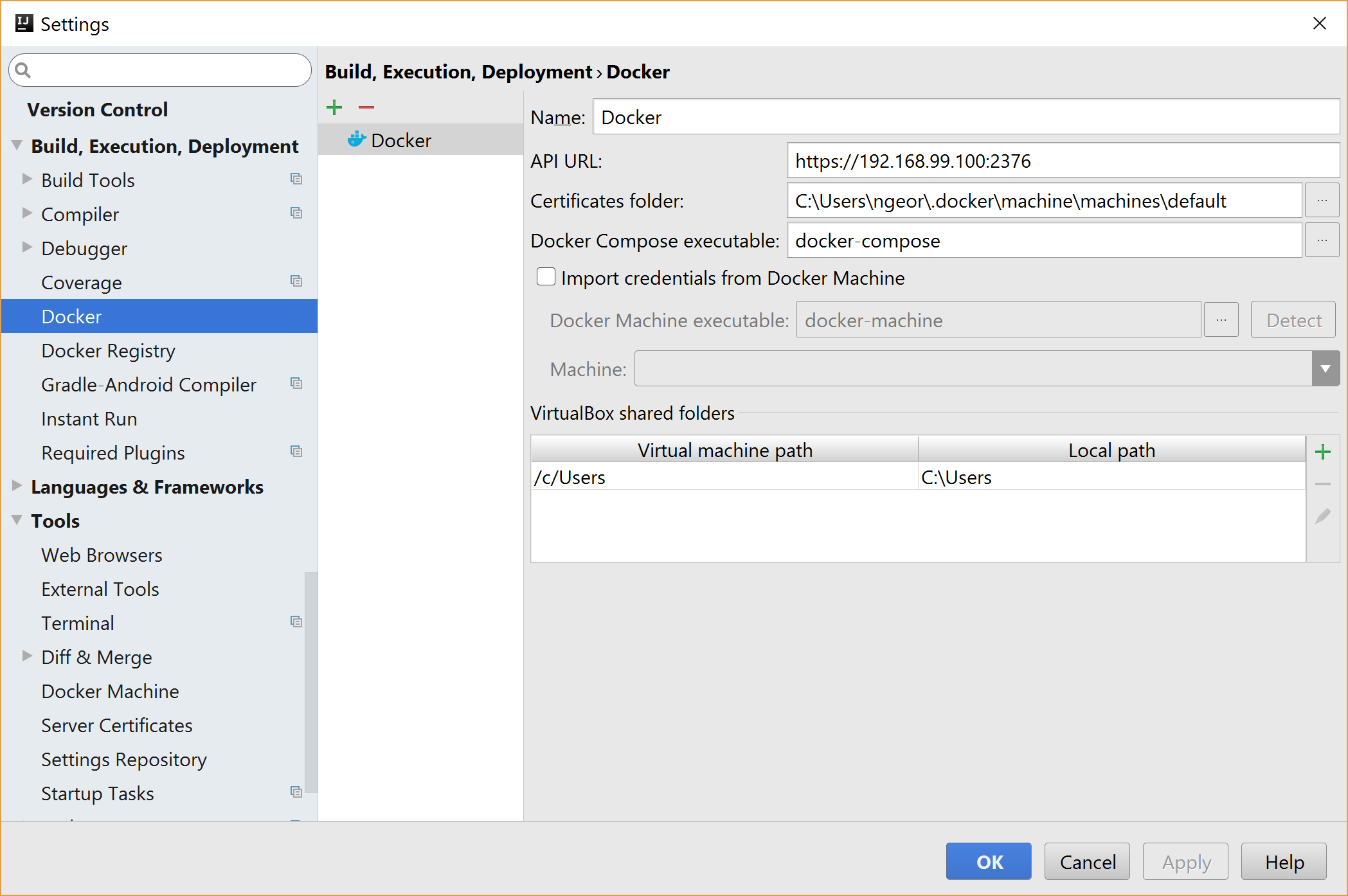 It is quite smart, you probably won’t have to do much typing. You’ll find it sitting at the bottom toolbar: 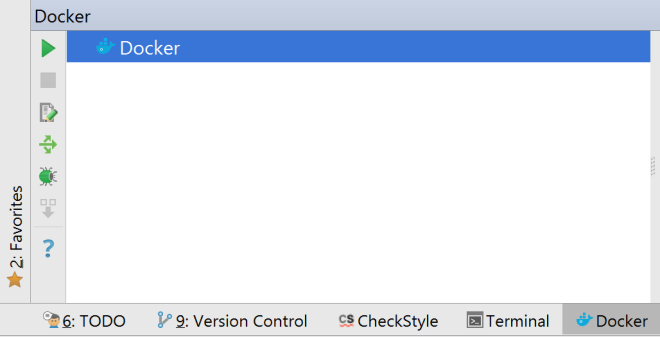 The green play button connects you to Docker: 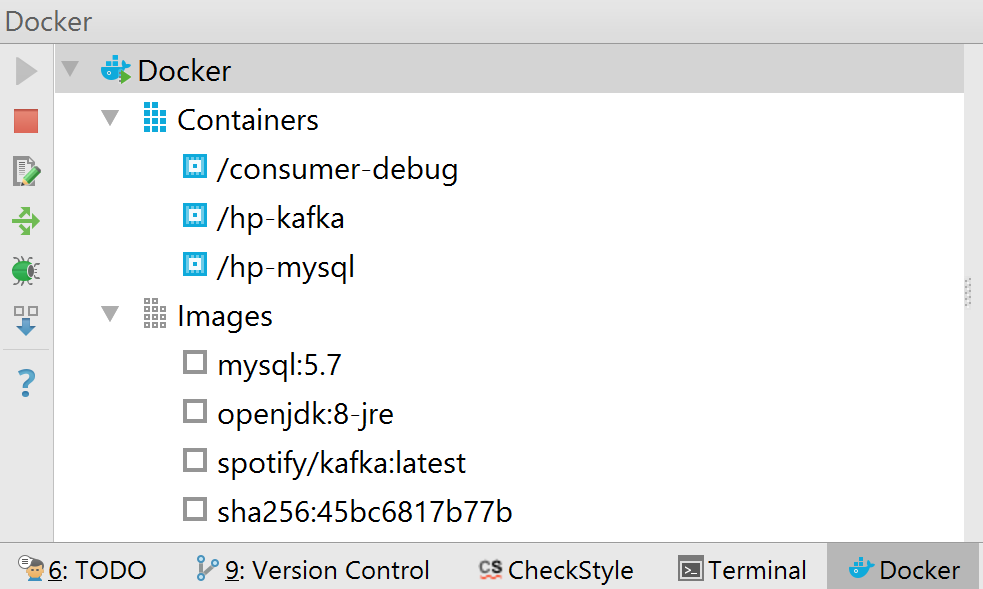 Notice that it lists existing containers and images. The containers are all stopped. I can right click the “hp-kafka” container and run it: 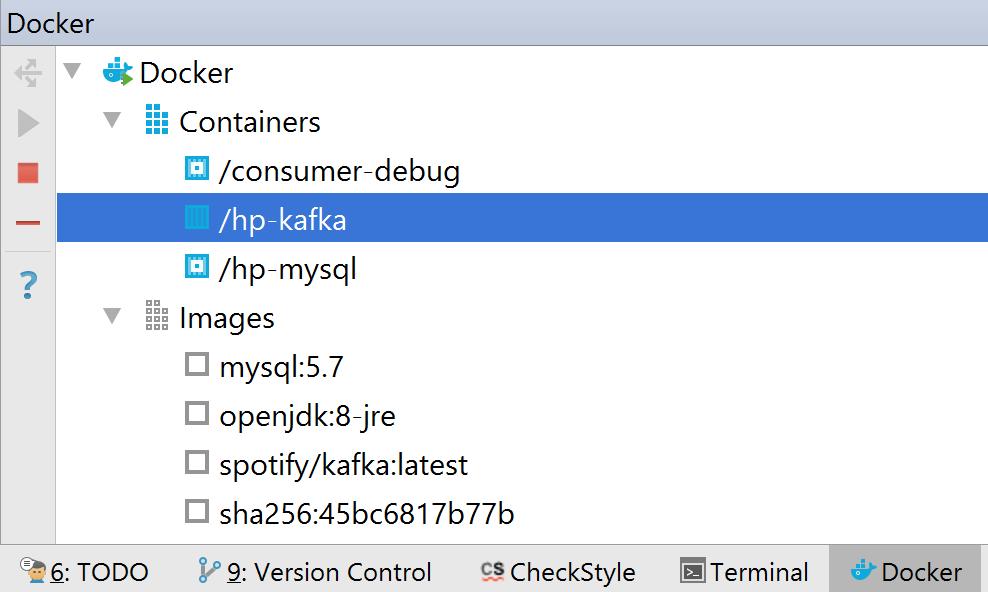 Notice that the icon changes into a filled light blue box.

To be able to debug our app, we need a new debug configuration: 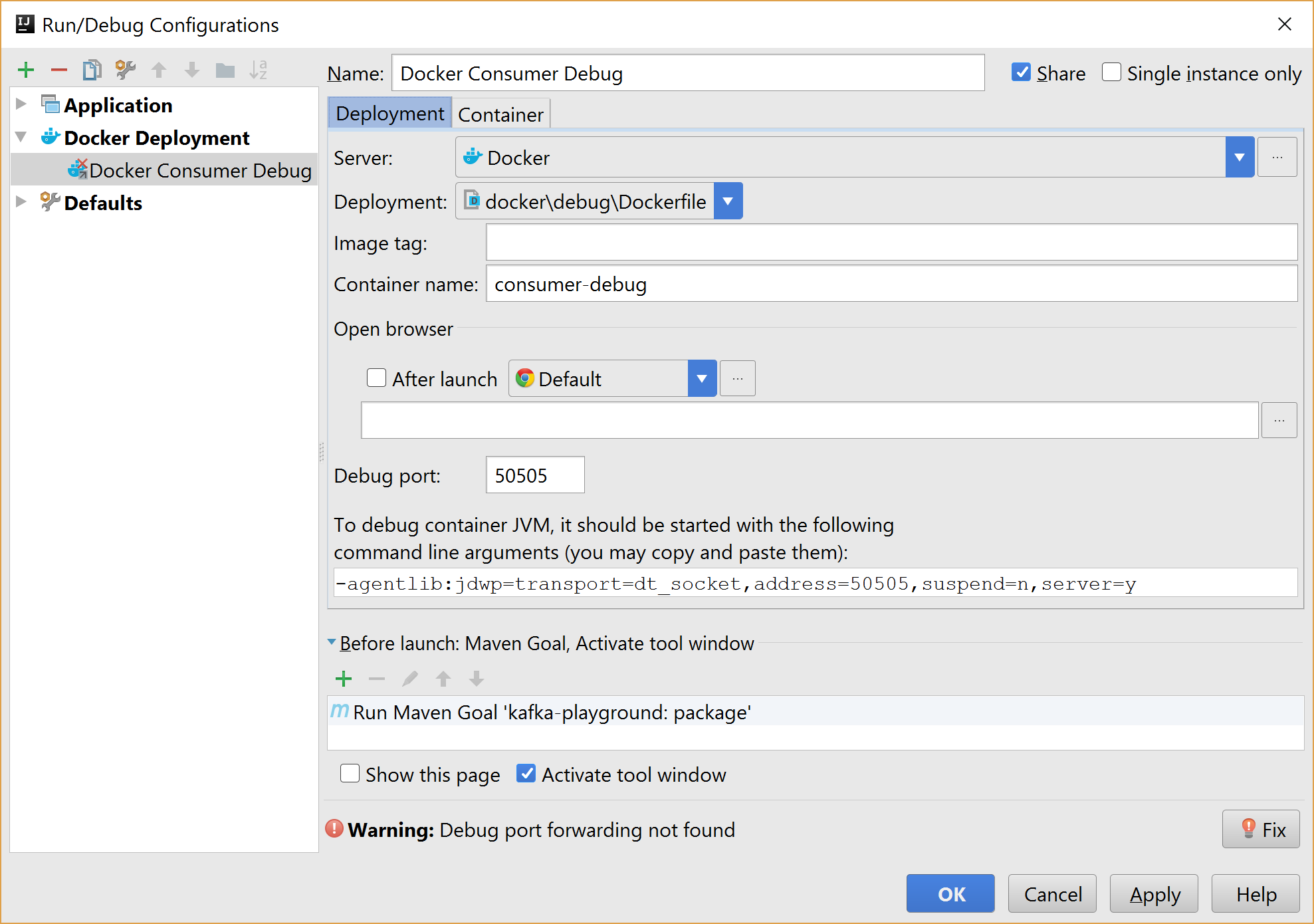 Let’s take this step by step: 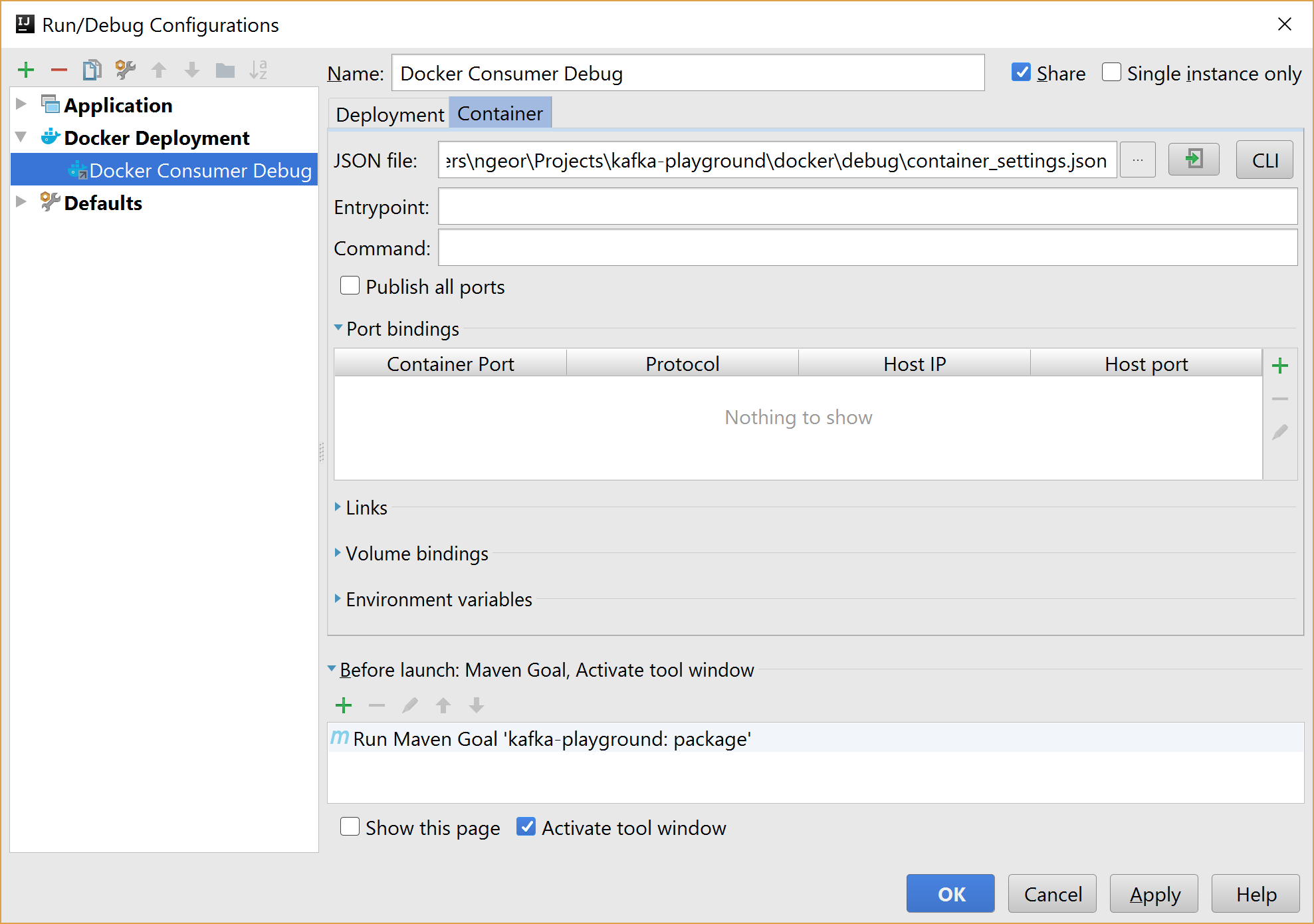 And with this the warning disappears: 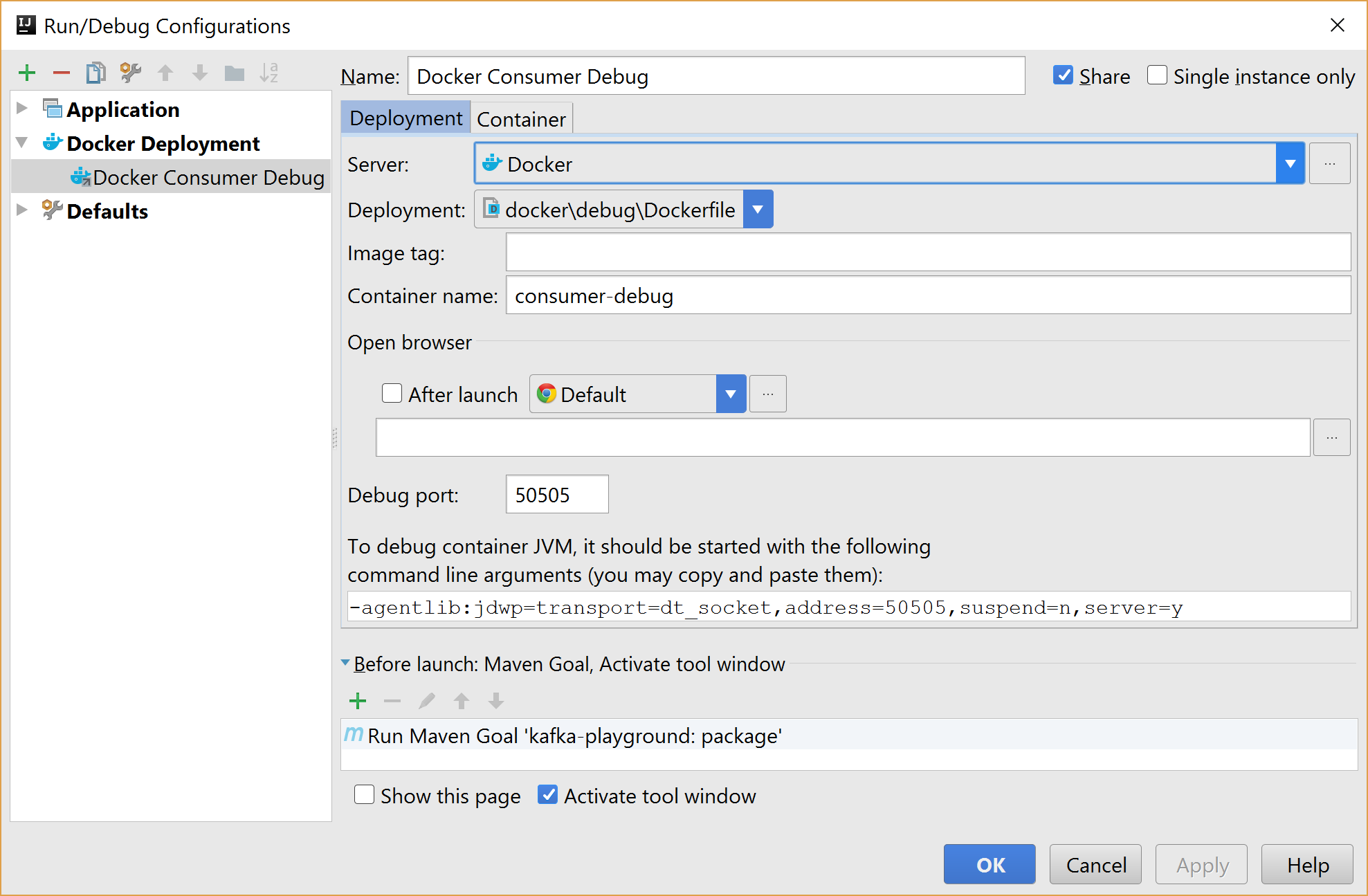 We can finally debug! We start the debug configuration with the debug icon. IntelliJ switches to the Debug panel:

If you don’t see this message immediately, you need to go back and see if everything is configured correctly.

In the Docker panel, we see the container running:

and we can also see the messages our app is printing:

Let’s put a breakpoint on the line where a new message is received from Kafka:

To hit that breakpoint, we’ll need to actually send a message. Let’s start the producer. This is not a Docker container, just a regular Java app:

IntelliJ allows you to run all sorts of things at the same time, so we can manage everything from the same IDE window. The producer is interactive, so we type the user information at the console:

As soon as we enter all information, the message is sent and the breakpoint is hit: 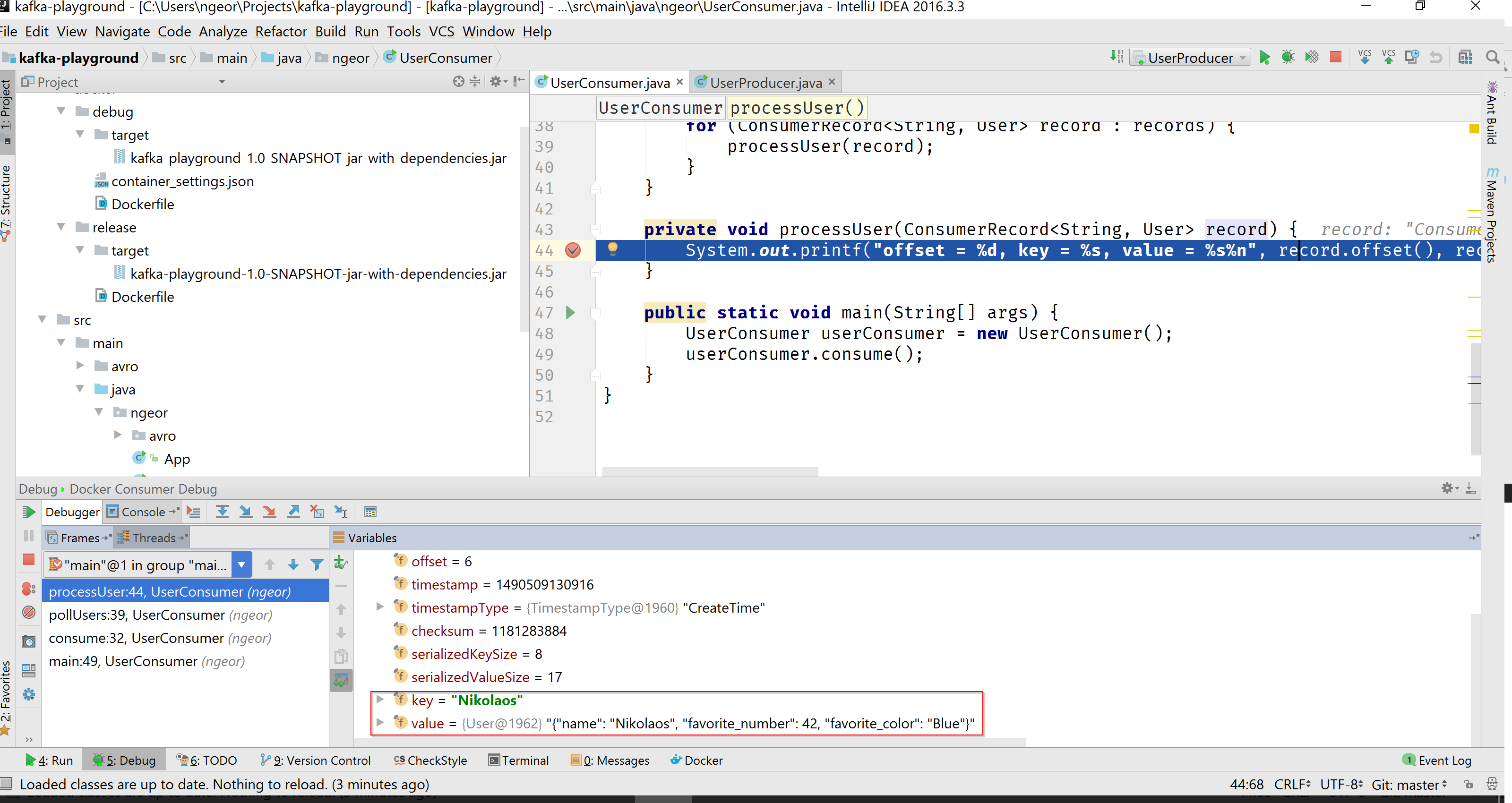 The experience is the same as with local debugging, you can see the variables, the call stack, etc.

One minor thing I found is that it’s useful to share the debug configuration within the team. Normally, I exclude all IntelliJ files from git. I think this one is useful, so I’ve adjusted the gitignore like this:

I see we’re doing this wrong currently at work, where every developer creates run/debug configurations independently.

Tags: docker IntelliJ IDEA java kafka maven
Thank you for reading this post. If you liked it, spread the word or see how you can support this blog!
« Kafka with Docker: A Docker introduction Publishing my first Maven package with Travis »
This site uses third party cookies from Google Analytics and Google AdSense Accept and close popup