I have several test fixtures (test classes) written in NUnit that verify my data layer works against a live database (MSSQL). By live I mean that there is no mocking or anything like that - that’s for the higher layers where I mock the data layer.

Now, I would like to extend my code to support more databases (MSSQL CE, SQLite) but I don’t want to start copy pasting my tests around or to create very complex inheritance strategies. These approaches are time consuming and require significant effort to maintain. Enter NUnit extensibility.

I found most of the information I needed in this nice article and I hacked away this morning into a result that works on my machine (TM) - and also on my build server! .

How to use it

all I need to have my tests target multiple databases is:

That’s it! With very little modifications to the test fixture, we enabled it to run twice. None of the Test methods need to be changed at all. The entire test fixture will be run twice. The first time it will run, the test fixture will be setup with the argument “MSSQL” (the argument is passed in the TestFixtureSetUp method). That’s when the test will setup whatever it needs to target the MS SQL database. The second time, the test fixture will run again from scratch, this time against MS SQL Compact Edition. The whole set of tests will run twice, no extra effort in code, no inheritance setups, nice and neat. When I want to test against another database, all I need to do is adjust the attribute on the class and the body of the TestFixtureSetUp method.

This is how this type of tests look like in NUnit GUI: 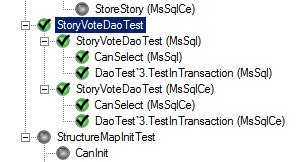 Notice how the test fixture has now child test fixtures, each for every database I want to target. The test methods themselves also contain in their name the database, to easily distinguish which database they refer to.

Installation in the NUnit GUI runner is easy. Simply copy the NUnit Companion DLLs to the addins folder of NUnit.

Integrating with TeamCity was a bit trickier but it worked in the end. Here’s what my configuration looks like: 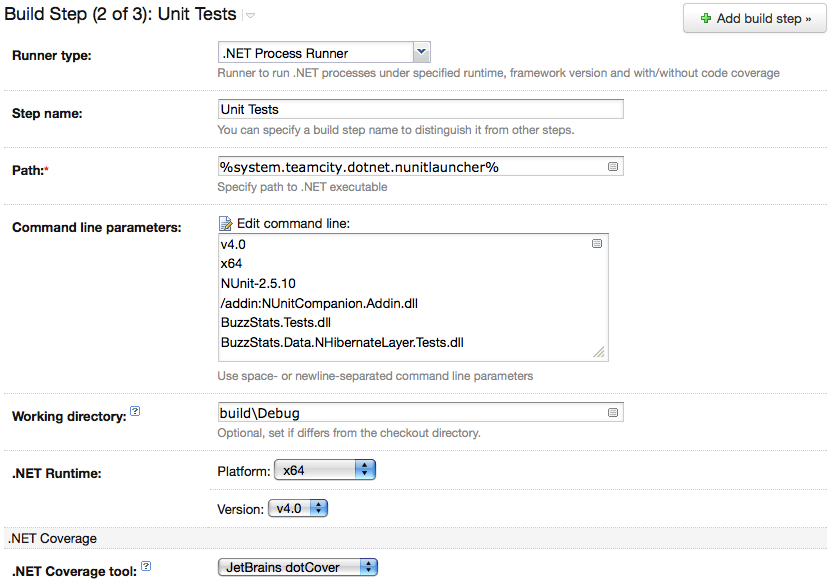 Some points of interest:

The user experience doesn’t change while watching builds run or observing build results. After all it’s the same NUnit runner underneath and it can communicate with TeamCity giving live results. Also code coverage still works as expected.

Thank you for reading this post. If you liked it, spread the word or see how you can support this blog!
Tags: NUnit Companion pet project NUnit .NET C#
This site uses third party cookies from Google Analytics and Google AdSense Accept and close popup