TL;DR: I wrote a script that discovers git repositories with an outdated parent pom and then it creates a pull request on each repository to set the parent pom version to latest and greatest.

A bit of background information: at work, we have at the moment something around 30 microservices. They all share the same technology stack, which makes it easy for developers to use existing services as examples for building new features and eliminates the overhead of context switching (I can’t stretch enough how important that is). All services are based on Java and Spring Boot (Spring everything really). We use Maven to build the projects and manage dependencies.

Speaking of dependencies, we have our own parent pom project to specify the versions of the plugins and dependencies. All projects inherit from that parent pom, which in turn inherits from Spring Boot’s parent pom.

When we want to upgrade a dependency (e.g. use the latest version of Mockito), we do that first in the parent pom. We change the desired version of Mockito there and bump the version of the parent pom. The upgrade of the services themselves to the latest parent pom happens eventually, typically when someone is working on a service and notices that there’s an upgrade available. If we’re not busy with a service, it will stay with its current parent pom version (if it ain’t broken, don’t fix it). There’s no strict process around it.

That’s all fine and it works so far. It might be annoying (and to me it is a bit) knowing that some services are not on the latest and greatest, but it’s not critical.

Wait. What if it were critical? What if the upgrade is not a nice to have but a security fix for a vulnerability? Then you’d probably want to upgrade everything as soon as possible.

Here’s what needs to happen:

The python script that does all of the above weighs in at exactly 200 lines, and while it could probably be improved a bit, it works on my cloud.

This is what the main method of the script looks like:

And this is the list of PRs that are now open for review (hurray): 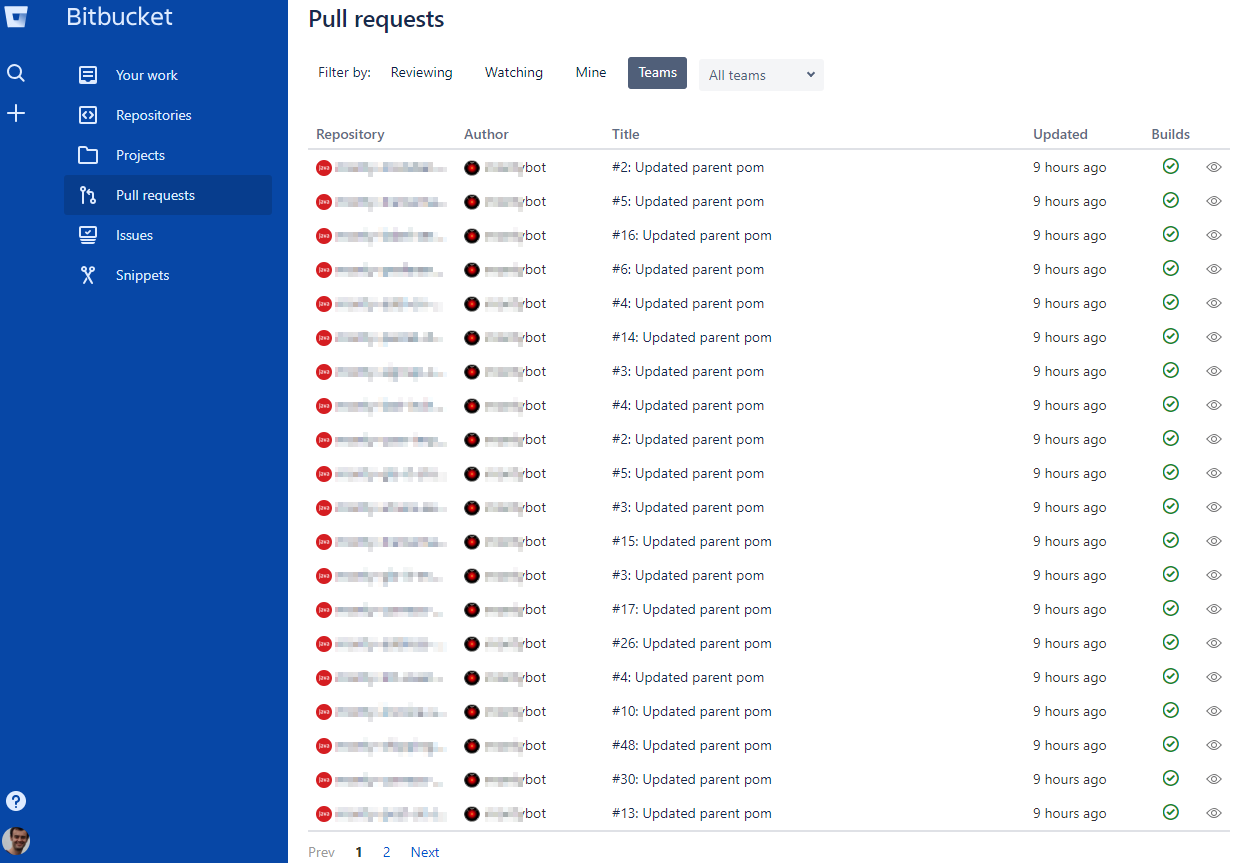 A possible alternative could be for the script to push directly to master instead of creating pull requests. That has some problems:

(oh and multiply the above by the number of microservices)

The nice thing with this type of automation is that it feels like having an extra team member who watches over the codebase and takes care of it. You don’t need to remember to do it, you don’t need to worry that you might forget it.

And this is a first step for further workflows like this. Until then, here’s a fitting song:

Tags: python bitbucket maven microservices dependencies parent pom
Thank you for reading this post. If you liked it, spread the word or see how you can support this blog!
« Goodbye bash Custom Tooling »
This site uses third party cookies from Google Analytics and Google AdSense Accept and close popup