During the past year at work, we did a complete rewrite of our websites from scratch. Not only did we aim to build a mobile-first responsive website with high performance, we also tried to do it with continuous integration and continuous deployment in mind. All that on a proprietary platform not built with CI in mind. This was a very big challenge, which involved a culture change in a lot of people. Unfortunately, the project had a hard deadline. Things were left out. Corners were cut.

We did succeed in making one of the fastest websites among its competitors. In many aspects the rewrite was a success. We definitely delivered a better implementation that the previous and this one can grow. To give a hint, the old implementation had no tests whatsoever and people could upload custom code directly on production.

However, people are a bit happier with the result than what they should. Mostly because they judge the success based on the sleek appearance and impressive load times on the frontend. Which reminds me of the following cartoon: 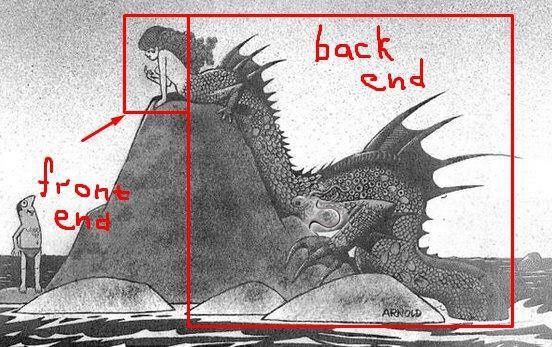 While things are not looking bad on the frontend, our OPS are starting to discover what goes on in the backend. To name a few:

(We left out a lot more on the backend, but this is what the OPS notice most)

This leads to a lot of manual work for the OPS and a lot of knee-jerk reactions on every incident, leading to ad-hoc panic and overtime.

Why do the developers not take these things into account?

How to go about fixing these problems is beyond my knowledge or my responsibility to begin with. But I find these problems interesting as well as painful. I think it is perhaps useful to see what other companies are doing. How are they organizing their teams? What talents are they hiring for? Are developers empowered to work on things they think they have priority? Or are developers passively working solely on business priorities? Do developers have a passion for technology or is it just a job? Does the business understand the importance of having a strong technology culture or is it just a necessity to keep the machine working?

Some of these questions are broad and identity defining for an organization. I have ideas but not answers, in the sense that I don’t know what would definitely work.

Back to the OPS challenges, I was thinking of a dedicated team of developers that serves OPS. However this can easily degenerate into a cleanup team, repairing half baked features delivered by the other teams. It doesn’t solve the problem at its root. It could solve the problem of repairing existing bad implementations though, without having the OPS frustrated and feeling helpless.

Thank you for reading this post. If you liked it, spread the word or see how you can support this blog!
Tags: culture devops technical debt notes
This site uses third party cookies from Google Analytics and Google AdSense Accept and close popup