Some time ago, I stumbled upon this article regarding productivity tools by ProductHunt. It’s a long list, but I noticed the first section “Habit and Goal Trackers”. The term habit tracker was new to me.

These apps, mostly for your phone, help you form new habits and stick to them. What is a habit? It can be anything really. Could be something like giving up smoking. Exercise more. Learn something new. How do these apps work? You tell the app what habits you want to build and the app reminds you about it. Let’s say the habit is about reading 10 pages of a book everyday. Everyday the app will ask you how many pages did you read. If you’re doing well, you get a nice green check and perhaps a nice motivational message to keep you going on.

A common concept here is the chain or the streak: how many days in a row can you go on keeping your promise? It’s like a competition with yourself really and I find it quite motivating. Some services that I use, like DuoLingo and GitHub, already use this motivation technique. 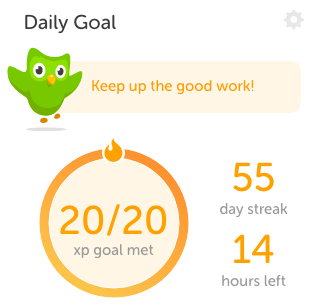 Habit trackers often take this concept and extend it to any habit you’d like to build. DuoLingo and GitHub are examples of daily habits, but a habit doesn’t have to be daily.

As I was going through the various Habit Trackers on ProductHunt’s article, I noticed two things: first, these apps looked amazing and very well polished. Second, none of these apps was available for Android… which left me very disappointed. I started doing some search of my own in Google Play Store, but I couldn’t find any app looking even remotely polished as the fancy iOS ones.

Another difference is that the iOS apps were most of time paid apps (for a small price) while the Android ones were either free or offering in-app purchases. This seems to be a pattern with the Android world. Is it perhaps because Apple users are perceived to be more willing to spend money? I would be willing to pay for a nice Android app. Is it because of Apple’s review process when submitting an app to the iTunes store? I don’t know, but as a consumer I feel like there’s a gap here.

Back to the trackers, I’ve been using two of them for some weeks now. Like I said, they both leave a lot to be desired. The first one is called GoalTracker and it’s free. The second one is called HabitBull and it offers in-app purchases. Why do I use two? GoalTracker has almost everything I want, but it doesn’t visualize the streak (HabitBull does). HabitBull on the other hand is a bit confusing (at least to me) with non-daily habits.

Before these apps, I tried to maintain an Excel file on my computer and just update it daily. It didn’t work very well. The primary computer these days is the mobile phone. It’s in your pocket, you open the app, tap, done. The Excel file was too much work compared to the apps.

Another note here is to set realistic goals for yourself. Otherwise, you’ll get disappointed, demotivated and probably give up. Developers will know this concept from Scrum, just commit to as many points as you can honestly deliver.

For me, some habits are working and some aren’t. With DuoLingo I’m doing quite all right, every morning I practice until I reach my 20 points. I’ve been doing that for 55 days now in a row! Never went this far before.

Another thing I’m doing is writing code everyday for at most 30 minutes against a GitHub project. I found that idea in a blog somewhere and it’s very interesting. The important thing is to never exceed 30 minutes. If you spend too much time coding, you’ll end up missing out on other things in your daily routine. If you don’t code at all, you’ll miss it. I find half an hour to be a good balance so far. Keeps the appetite going, doesn’t leave you hungry, doesn’t leave you full either.

What hasn’t worked for me is book reading. I’ve got many books that I bought but haven’t finished or haven’t even started reading. I set a goal to read every day for 30 minutes. But it’s often the case that I just watch some TV series instead. Motivation is not unlimited and bad habits are not easy to shake off. Perhaps trying to build up too many habits at the same time is also not the best way to go.

I think that once you’ve stuck with something long enough, then it kind of becomes your second nature, so you don’t need to spend willpower on that. I see it in myself with running, I’ve been running more or less consistently since 2013 and it’s just impossible for me to not run every week. And having an app in my phone for running was important in keeping me going. Somehow the statistics and the numbers keep you motivated to go on.

If you use Android and you have some app suggestions, please leave a comment! Thanks!

Thank you for reading this post. If you liked it, spread the word or see how you can support this blog!
Tags: android DuoLingo GitHub goals habits motivation running streak trackers
This site uses third party cookies from Google Analytics and Google AdSense Accept and close popup