In this post, I’m going to discuss the setup I have for deploying an ASP.NET application in Linux.

The application is actually my pet project BuzzStats, so that name appears all over the place here. Feel free to think of it as ‘HelloWorldApp’ or ‘MyWebApp’.

Here’s a nice diagram I made that illustrates my current deployment process: 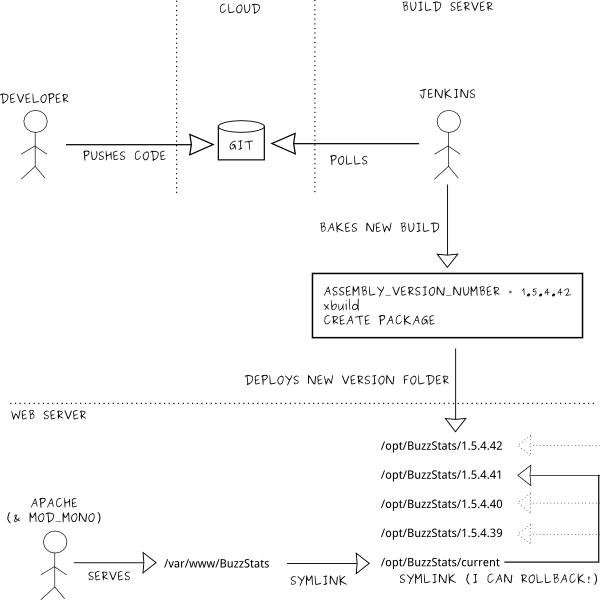 The basic points are:

In my current setup, the build server and the web server are actually the same physical machine. My next step would be to separate that also.

To support versions of deployed web applications, I use symbolic links.

Typically, you would find the application under /var/www/BuzzStats. I follow that convention, but I make a symbolic link to the actual place where the application lives.

and that one is also a symbolic link:

Switching between versions is as easy as changing the symbolic link of current to point to a different version folder. Activate the latest and greatest, figure our there’s a missing image? Rollback immediately and easily to the previous version.

Let’s have a look at how the version number can be generated on the build server.

In Jenkins, I use the Version Number Plugin to create a formatted version number. These are my settings:

With this setup, I have an environment variable called ASSEMBLY_VERSION_NUMBER which will contain a value like 1.5.4.42 that will be incremented automatically every time Jenkins bakes a new build.

A note on version semantics: for now I’m using a simple solution. The first part of the version is hard-coded in my Jenkins settings (1.5.4). The last part is Jenkins’ own build number which is automatically incremented. You can chose a different strategy for the version, e.g. based on the date of the build. I will probably also change this in the future so that only the 1.5 part is hard-coded. If you like this topic (I do), you can further read Semantic Versioning 2.0.0 and Which Version of Version?.

Now that we have the version number as an environment variable, we can use it during the build process.

With this setup, after each build we have a new version folder under the main folder /opt/BuzzStats. The version is not activated; remember that the web application is still pointing to /var/www/BuzzStats which in turn points to /opt/BuzzStats/current which still points to the old version.

Activation could also be part of deployment:

One caveat here is that mono doesn’t detect the change and still continues to run on the old folder. The only way I’ve found so far to “fix” this is to kill the mono process with pkill mono. Obviously this will kill all mono processes which could be a bit more than what you want…

So, for now, I’ve left that as a manual step. I’ve written a small web application to manage activation and rolling-back using a simple UI and I’ll show/share that on a follow-up post.

Thank you for reading this post. If you liked it, spread the word or see how you can support this blog!
Tags: continuous deployment continuous integration versioning
This site uses third party cookies from Google Analytics and Google AdSense Accept and close popup